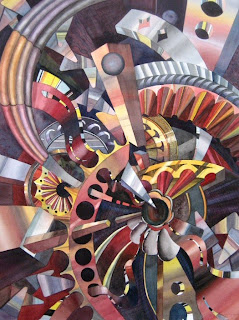 The Universal Law of Gravity by Katharine A. Cartwright
Series: The Laws of Nature
Watercolor on paper, 26" x 20"

I completed this painting two days ago and have had a lot of questions about this new series from bloggers and non-bloggers alike. So, I thought I'd use this weekend post to provide a greater explanation of what I'm doing.

Those of you who've followed my work know that I'm a "series" painter. I spend copious amounts of time thinking about concepts for series. I rarely write down my ideas and mostly keep them in my head. This past winter, I painted a number of false starts in series that didn't satisfy me. I may return to them in the future for refinement, and those paintings serve as my "notes."

My newest series, The Laws of Nature, was formulated in a painting demonstration I gave to a student last winter. The lesson was about the division of space in non-objective art to create effective designs. I set that demo aside for about a month, and then decided to use it as a foundation to create this new series. There are only two transitional paintings between the original demo and the first formal painting in this series, The Law of Reciprocal Actions. The concept for this new series is to comment on the attempt by humans to harness the raw materials and energy of the universe through our technology within the limitations of the physical laws of nature, which render our "machines" imperfect and our attempts flawed. This is not a statement against technology; rather, it's a comment about our limitations.

Most frequently, I'm asked about how I create these paintings. Unlike my previous work, I use no references outside of my imagination. I begin by stretching a full-sheet of watercolor paper and outlining the intended perimeter of the painting (26" x 20"). Then I ponder the physical "law" that will become the subject. Once I understand that law, I begin drafting forms on my paper after I've selected a focal point (or node) according to the Law of Thirds. Using my imagination, I begin with integrating forms at the focal point and then expand from there. The only thing I think about is how these forms will relate to each other, creating a variety of shapes, and establishing directionality. My approach is improvisational since I don't do any prior sketching. It takes me about two hours to complete a detailed pencil contour drawing.

Next, I select five colors and begin painting. I have no plan, but try to pay attention to establishing color dominance and using color to lead the eye. Precision painting takes a looooong time, so I need a full week to complete one painting. I'm never quite certain how a form will be painted, and usually don't decide until I've completed several adjacent forms. That tells me how to paint the next form. This is a purely intuitive process.

I've completed three paintings in this series and am now drafting the fourth, entitled The Law of Inertia. Believe me, I've had to overcome a lot of inertia to arrive at solutions for this one!!

I'll conclude by saying that this series is the easiest one I've ever painted - it freely flows from my subconscious and is quite natural. This is probably because I'm painting the worlds of my imagination, so it comes naturally and is satisfying. Isn't that what it's all about?

Your thoughts?
Posted by Unknown at 6:50 AM

I find these works very intriguing and the energy keeps me returning to them . This subject matter to my mind fits you perfectly and your process of completing a piece is a law too! Any one of these new works is how I imagine your head works. a representation of inner workings.

Katherine, you are amazing. It seems like you are finishing these incredibly detailed paintings at warp speed. Maybe that should be one of your titles. Anyway, I just love the complexity and detail you put into them. I can't wait to see the next one. When you start a series, do you have an idea of how many there will be or do you just continue until another idea pushes the present one out of your head?

Wow,I am awed by this...incredible energy and movement. I am so pulled into this piece and look forward to seeing the rest!!

kathy, thank you for posting your process. it is amazing to see. I especially like this color palette!
Keep 'em coming!!

Thanks for explaining, I was wondering why they were all interpreted as machine images. I would have thought each law to be completely different in type of form but with the explanation it makes sense. They are beautiful, impressive images regardless.

Fantastic. I think you must have managed to harness at least your share of the energy of the universe.

And I agree with Margaret. When I look at these I will imagine your mind wheels turning.

Thank you all for your generous words of support! I genuinely appreciate it, and return the complements to you all!
Nancy, in answer to your question - I really don't know how many paintings I'll produce in any series. For instance, the eggshell series now has more than fifty in it and I'm certain there will be more in the future. I'm uncertain about when this present series will end, as well.

I think the feeling that painting these are quite natural is the result of years of study of technique, form, and color. This is what a virtuoso is. I can really connect to this series and am glad you chose it over the other (for now). The result is remarkable! I still cannot believe it is watercolor.

As I read your description of your process the word "jazz" came to my mind. I once looked for a concise description of jazz and narrowed it down to "improvisatory polyphonic ensemble". This seems to fit both your process and your results - which, as you know from my previous comments, I LOVE!

I'm really not surprised that you are finding these easier to do than earlier series - they so perfectly reflect your interests, loves and life's work. IMHO, everything you've done before has been in preparation for this series.

I'm really humbled by all of your generous support of my work!

Margaret - it's ture that this is how my "head works." My husband laughed in recognition when I read to him your comment. He agrees with you!

Hi Carolyn - thanks for being the catalyst for this series!

Hi Tonya - you make me think about the title for the series and I might have to add machines to it somewhere to help the viewer. Thanks for making me think, and for your generous support!

Hi Hallie - Thank you! The next painting has a lot more "wheels" in it :-)

Hi Dan - you're correct in saying that my years of experience in technique, color, and composition are an important partner to intuition. Without that, I couldn't paint these. Thank you!

Hi Don - "jazz" is the perfect word! That's exactly how I feel when I'm painting. I like the way you distill things - makes sense. Thanks so much. Joy it is!

Unbelievably complex painting as usual.Thanks for sharing your process. I'm not surprised at the work and thought that you put into it. It shows!

Hi Kathy, Most intriguing series! I can't help but think that this series is a natural extension of your "Fragility" series...don't know why exactly. I am in awe of your ability to improvise and unite such a complex looking design!

Katharine, you already know how I feel about this series. It is powerful, and you are absolutely correct when you say, "it freely flows from my subconscious and is quite natural. This is probably because I'm painting the worlds of my imagination, so it comes naturally and is satisfying". That is what it is all about! I agree with Don; everything you have done has lead to this series. The new piece is awesome and I've studied it since I first saw it a couple days ago flashing across the top of you blog.

Hi Eva - Thanks so much!

Hi Peggy - you're very perceptive! This is series is a logical "next step" from the eggshell series and shares some of the same complexeties. Thank you.

Hi Stan - I get the same sensation from viewing your work, which must spring from an internal world and years of experience as an artist. Thank you!

Sexy painting. I'm impressed by the way you work. You're showing a life time of experience in knowing how to shade these from your imagintuition!

Hi Mark - you're a clever wordsmith!! I love the word you coined: "imagintuition!"

Wow! these are wonderful

Kathy, your new work has me spell bound. I can't wait to see the originals up close and personal. They are the visual sound of the eternal whirring in the mechanistic process of the laws you are intuiting.

Hi Stephanie - wow! I wish I had your gift for wordsmithing. Well stated - and, very generous since these words come from a TRUE master in the art world. Thank you.