1902 photo of Robert Henri (pronounced hen-rye), born Robert Henry Cozad in Cincinnati Ohio. The family moved and changed their names because of a scandal, where Robert's father shot and killed a rancher with whom he had a dispute over pasture land.

The Art Spirit by Robert Henri

It's time to end our discussion of Henri's book and begin a new book next week. Tomorrow, I'm going to New York City for the weekend to view the AWS (American Watercolor Society) annual exhibition and tour some museums. So, I won't post again until my return. To end Henri's book, I'll examine this statement:

It would be easy to divide artists into two classes: those who grow so much within themselves as to master technique by the force of their need, and those who are mastered by technique and become stylists. (p. 171-172)

To me, this is the difference between an artist who has something to say (a statement) and an artist who wants to create an effect. But, does this mean that one is necessarily superior to the other? Is there an equal role for both in the art community? Do both types inhabit the museums of the world?

I don't have "the" answer to these questions, but I do have a personal preference for content-rich paintings. All of my series are concept-based. However, I do enjoy the "feel" of painting. It is a sensory experience that yields great satisfaction even if there's no content, or statement. But, does the sensory experience of creating a painting translate to the viewing public or make a significant contribution to art? I guess there are a variety of viewpoints about that.


On another note, and for your entertainment, here's the first and second painting in my new series entitled "The Laws of Nature": 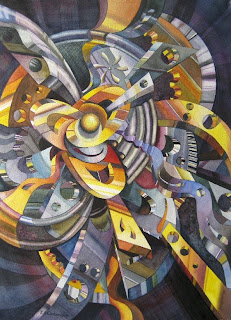 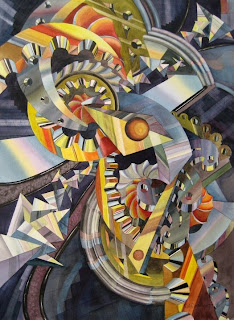 The Law of Reciprocal Actions (left) & Entropy (right)
by Katharine A. Cartwright
watercolor on Arches paper
both 26" x 20"
Posted by Unknown at 2:06 PM

Kathy, these new works are fantastic! I get lost in them for huge stretches of time, just absorbing. I'm really drawn to what you've done to create the metallic look to your objects and how you manipulate perspective to create your own world.

The titles are perfect. "The Law of Reciprocal Action" keeps me moving throughout the whole time I'm viewing it. It's like continual motion is happening right in front of my eyes. In "Entropy" everything is in conflict, bringing all motion to a screeching halt. I can almost hear the gears grinding against each other, making no progress.

Once I saw these two beauties together I forgot everything you wrote, and any possible response I may have had regarding Henri's quote... And now all I want to do is stare - so, that's what I'll do.

Have a great trip.

Wow! I love the new paintings! They are beautiful in their color, but also in their complexity and the sheer power of machinery. I'm so glad you showed your work. I love to see it.

I think all artists are a mix of both. It also seems that most begin like the first sort and slowly accidentally creep into becoming stylists. Perhaps successful professional artists don't have as much to shout about as angry young students.

There's definitely more motion in your first picture which I like lots. Both spiral in and reflect in an animating way. Without a title the second doesn't cry entropy to me, although I can see chaos in the triangle streams and like Don feel a sense of "grind".

There are a variety of viewpoints; I sometimes agree with all.

Your wonderful paintings remind me of Escher, whose work I love.

Hi Don - so glad you like my second painting! These are fun to do and I enjoy the challenge.

Hi Mark - for me, it's just the opposite: the older I get the more I have to shout about :-)

Hi Hallie - yes, they are a bit Escheresque. But, I still don't know how he does it!!

Hi Pam - I hadn't thought about that interpretation - interesting! I've got my bags packed and will head for NYC before sunrise.

Looking back on the work that I've done I can say for sure that I have not been mastered by technique, so I guess I fit into the class of artists that master technique by the force of their need.

Your next painting in the "Laws of Nature" series is excellent and I ditto my comments left on the first. Just a quick question, and forgive me if you've already answered it: is this series a digression from the "Left Behind" series? As I recall you were taking a break and painted an image that is more in the style of the current series.

I'll bet you're having a blast in NYC!

Hi Stan - I moved away from the "Left Behind Series" because I need to return to my home on the Maine coast this summer to just look. My mind's eye is struggling. In the meantime, I'm having fun with "The Laws of Nature" and probably will make that my primary focus for many years.
We're about to depart for NYC and I hope to post some pictures when I get back. Happy painting!

fantastic is right! (I can not think of enough superlatives)

Stunning work, Kathy, and a worthy series for many years to come. Have a great trip to NYC. I know that you will have fun using your critical eye to determine if you agree with the choices made by the jurors. No doubt, you will also internalize some of what you see.

Thank you, Celeste and Mary!

Now I am becoming aware of some Cubism in these and that is blowing my mind. I am your biggest fan, and you should have been in the AWS exhibit this year.

I like the extra planes in Entropy and it really yields itself to the bent perspective idea. I am also interested in split or dual perspectives, and love the challenge of that.

Henri on content. I agree that content is deeper. I am discovering that technique has a positive role, but would never demand it as the best thing in painting.

But, content is very hard to portray, isn't it? Paint on, my fellows.

You and I have a strange parallel going (except you are a master, IMO). Both creating a new series (mine is almost done) and now it seems you are doing a left behind series about your Maine home. I am doing something similar about my hometown river, on the Washington coast. I am making short trips and painting from memory.

We could talk art forever.

HI Casey - thanks so much for your very generous comments. Isn't it neat that our lives are parallel right now!! Wish we could have that long discussion. Maybe one day :-)