Sincere thanks to all of you who wished us well during our recent move from NY to Maine! We arrived at our new home a little over a week ago and are settling-in. Although there’s still a great deal left to do, we’re comfortable. A new buyer for our NY home appeared within one week of relisting the house, so now we’re awaiting a new closing date. That’s a relief!


We had hoped to persuade the cable company to run wires here so we can access high speed internet. Being unsuccessful, we’re subjected to the glacial pace of modem and dial-up, which explains my absence from the blogosphere. Wifi access is available at the library about a half-hour away, so I’ll take advantage of that every now and then.


I’ve begun a new painting in my series “The Laws of Nature.” It’s entitled “Occam’s Razor” and should be completed within a week. There’s more pressure to produce now, since I’ve been offered a solo show in May. Somehow, between now and then, I need to complete ten more paintings!


This leads me to the theme for today’s blog: the importance of adversity.
Since we have no access to TV yet (another long story that involves Direct TV and its inability to provide us with someone to install the satellite dish that still sits in its box in our garage) we watch old DVD’s. I have the complete set of all six seasons of “Northern Exposure.” Near the beginning of season three is an episode about Ed’s discouragement with his film-making. General store-owner, Marianne, advises Ed that adversity is important for the development of great art. Without it, artists cannot significantly improve their work. That’s been my experience about everything, but that’s probably because I’m one of those people who seem to mostly learn from trial and error.

What I have learned & Moving day 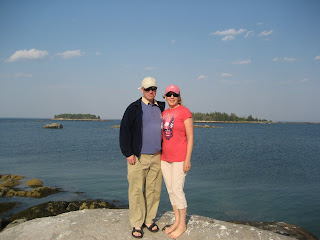 Thanks, all, for your wonderful comments to my posts. My last post, Understanding Art, included a comment that challenged me. Our good friend, Mark Sheeky, asked me “After years of analysis Kathy I wonder what you understand about art?" That’s a great question and one that deserves an answer.
My answer is contradictory: I’ve learned that I know very little about art and also all there is to know. I know little of the entire history of art, the myriad of materials and techniques used in all art forms, and the personal lives of artists past and present. There’s an ocean of information and my knowledge is just a drop in that ocean.
On the other hand, I know all there is to know about my own artmaking: I know why I paint, what I paint and how to paint it. I know my own world and can navigate it. In practical terms, that’s all I really need to know. (Sorry for all the "I's")
So, why bother to spend years reading about and discussing art theory?It's to satisfy my need to expand my understanding of my chosen profession. I no longer want to function as an artist in a vacuum, and need to connect with the art community and its roots. I’m curious. This has been a satisfying experience that has lead me to all of you! How great is that?

*****************************
Personal update: We’re finally moving to our home in Maine on Wednesday (16th). We would have moved earlier, but were waiting to close on the sale of our NY home. Just a few days ago the purchaser backed out (only one week before closing!). We were upset, but have learned to make lemons out of lemonade and are moving on. The house is back on the market and in the good hands of our realtor and a friend. It'll have to sell without us.

So, Wednesday is moving day followed by settling-in. I’ll try to check in whenever possible. Thanks for staying with me over the years and during my frequent absences. You’re all so dear!
Posted by Unknown at 5:50 PM 15 comments:

It’s mind-boggling how many books, essays, and articles have been written to instruct others on how to understand art. Analyses of technique, composition, materials, meaning, etc number as many as the stars in our galaxy and yet we seem to need more of them every year. Art has been put under a microscope. Although we artists hope our work will draw attention, but do we really need someone to act as an intermediary between our creation and its viewers? Do we really need someone else to explain to the public that which our art naturally speaks for itself?
One could argue that we all need to be educated into understanding art. Certainly that would be true for learning about materials and techniques. Perhaps it’s also helpful to the viewer to learn about the circumstances surrounding the creation of a work of art, and many analyses offer this type of instruction. Since I spent most of my career as an academic, I can’t argue against instruction. But, as an artist, I want my work to speak directly to viewers without the interference of an intermediary.

And, when you think about it, who really understands “art” anyway? I like this quote from an Ezine article by Redi Zartey:

Understanding art in its totality is almost an impossible task for a human being. There are over 3,600 terms in art to be understood. And these are not definitive in nature. Art is when you are free to redefine these. 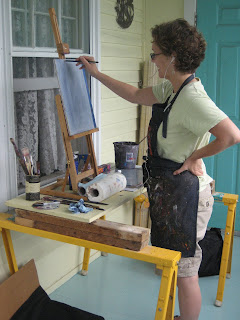 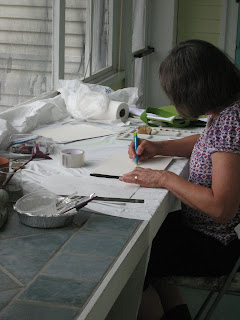 A brand new season of painting workshops will soon begin, and I’m ready to teach. Yippee!! For me, the season begins in May and ends in October. Venues are spread from coast to coast (California to Maine) and I’m always thrilled to work with new and returning students.

My lessons in painting match my personal philosophy: All great paintings begin with a great concept, and that concept must come uniquely from the individual artist! It’s all about helping my students find their own voice and then effectively expressing it in a way that’s technically masterful. It doesn’t matter to me which medium my students select, it only matters that they’re willing to engage in original and meaningful artmaking.
It’s taken me awhile to develop a good method for helping my students to find their own voice, but it really works. I challenge them to tap into their own relationships with the world around them and apply their intuition and imaginations to their interpretations. This means turning away from imitation and strict copying of photographs.
What I really love about teaching is witnessing how my students respond: lightbulbs turning on! I never grow tired of it, and am anxious to begin the new season. So, materials are being packed, airline tickets are being purchased, and anticipation builds as I look forward to working with a whole new batch of students.
If you’re interested in enrolling in one of my workshops, the schedule is listed here: www.kacartwright.com.
Come join us!
Posted by Unknown at 1:03 AM 10 comments:

Lately, I’ve been interested in finding facts about the status of professional visual artists in this country. Is the “starving artist” a commonplace condition or a myth?

This led me to the NEA website where one may access their publications on this topic and more. To see the list and read the research publications, go here.

Research Report #48 Artists in the Workforce: 1990 - 2005 (which is a follow-up of Research Report #37 Artists in the Workforce: Employment and Earnings 1970 – 1990) provides us with a scenario based upon statistics from census data. Therefore, Americans who declared their primary career as “artist” make up the data base for this report. “Artist” includes all forms of art (e.g. literature, theater, music, visual arts, etc) but I’ve chosen to focus upon the visual arts in this report. We are listed as “fine artists,” which is defined as “art directors; craft artists; fine artists include: painters, sculptors, and illustrators; multi-media artists;animators.”

Here are some interesting findings about the state of professional fine artists in the USA between 1990 and 2005:

Geography
Not surprisingly, most artists during this time lived in California, New York, Florida, and Texas. On average, in 2000, there were 68 artists for every 10,000 people and 8 of those were fine artists. However, in Vermont and New Mexico, 15 were fine artists, followed closely by Hawaii and Montana with 10 or more.

As you would expect, opportunities for employment as an artist are greater in metropolitan areas. Half of all artists live in major cities like New York, Los Angeles, and Chicago. But, the homes for fine artists are (in order of highest to lowest population):

I was unable to find the statistics for these categories in the “fine arts” so the following statements apply to artists in all categories:

Artists in all categories are more likely to be men than women.

In keeping with the labor force as a whole, most artists are white, but again like the labor force, the artist population is quickly becoming more diverse.

The 2003-2005 data indicate that the numbers of self-employed artists are increasing, with 35% of all artists self-employed, and each artist occupation showing more than 20% self-employed.

Compared to other professionals, artists are less likely to report full-time employment in their field (more than 35 hrs/wk and 50 wks/yr).


Returning to my original inquiry about the “starving artist” image it seems that it is a myth – at least for men. It looks like women must live on a much smaller income that can’t support a reasonable lifestyle in an urban area where most artists live. So, women tend to fit the "starving artist" image. But, you can form your own conclusions.

What are they?
Posted by Unknown at 10:31 AM 12 comments:
Newer Posts Older Posts Home
Subscribe to: Posts (Atom)