Simple Explanations and Your Tax Dollars 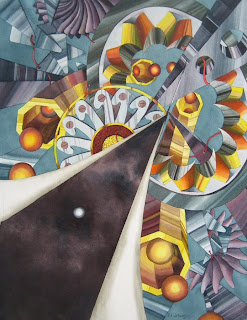 Occam's Razor by Katharine A. Cartwright Watercolor on Arches paper 26" x 20" If two theories predict phenomena to the same accuracy, then the one which is simpler is the better one. Moreover, additional aspects of a theory which do not lend it more powerful predicting ability are unnecessary and should be stripped away. The simplest explanation for my extended absence from blogging is lack of high-speed internet access. Moving to Maine has only one "down side" and that's it! Time-Warner won't string cable to our home, Hughes satellite is too expensive and unreliable, Verizon's MiFi doesn't get a signal, and local WiFi access is a fifteen minute drive. So, I'll post when I can and apologize for not visiting your posts!! In the midst of settling in to our new home, I managed to add this painting to the "Laws of Nature Series." My interpretation of "Occam's Razor" is that the "singularity" that theoretically gave birth to our universe is the simplest possible explanation for the laws of physics. Our complicated and elaborate attempts to modify what naturally occurs leads to chaos and can only be imperfect. So, the razor cuts through our efforts to reveal the primordial singularity in the ancient sky. I intend to stick with this new series for at least five years and will interpret all the laws I've already painted and visit some new ones. There's always room for improvement and new ideas. On another note, I'd like your opinion about public support for the arts. I was having dinner with some folks the other night and someone made the comment that he didn't want his tax dollars used for the arts. I strongly disagreed with him for many reasons, but would like your opinions. Should public funds be used to support artists and art projects? Why or why not? To what degree?
Posted by Unknown at 7:09 AM 15 comments:
Newer Posts Older Posts Home
Subscribe to: Posts (Atom)