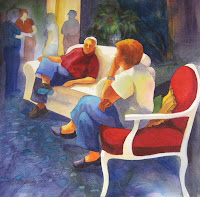 Communication is the second principle in Ian Roberts' book, Creative Authenticity: 16 Principles to Clarify and Deepen Your Artistic Vision. Fundamental to the principle in this chapter is the notion that, today, the artist expresses an idea or feeling when creating a work of art. This notion has been discussed many times on this blog. But, what interests me most in this chapter is Roberts' ideas about the differing schools of thought that govern an artist's form of communication.

The first school of thought is since the artist is communicating a response to something, he or she should make that response intelligible. It should be adjusted if necessary to the audience. This approach is exemplified by Renaissance artists who worked within the patronage system, and other commissioned artwork since that time.

The second school of thought holds that the artist should not alter anything for the market. This idea renders sacred the ideas and feelings of the artist and, in my opinion, has merit even though it often forces artists to get a second job to support themselves or succumb to the "starving artist syndrome." But, Roberts wonders, does this school of thought also produce artists who air too much dirty laundry? Who reveal too much that is personal and has no social relevance? He states that deeply felt, authentic work does connect to something universal and hence touches a lot of people. He urges artists to keep deeply personal stuff private and not air it in public. So, where's the dividing line for Roberts between what should and should not be expressed publicly in a work of art? The unacceptable is ego driven, agitated and afraid. The acceptable is like a revelation.


I have many conflicting thoughts about this viewpoint. First, I believe in our individuality - that which makes us unique, not just in body chemistry, but also in the particular set of life experiences that make us different from one another. On the other hand, because we're all human beings living on the same planet with roughly the same needs (nourishment, shelter, companionship) and roughly the same general experiences (birth, growth, work, eat, sleep, interact, illness, death) we have everything in common! I can't imagine what idea or feeling I could paint that wouldn't connect with many, many people. (I'm referring to the message in my painting rather than the way I paint, which might not have universal appeal). Therefore, it seems that Roberts' restriction for all artists is based upon personal taste, which doesn't jive with how I think. I value freedom of expression and I don't like arbitrary censorship!

Returning to the two schools of thought for a moment, I've been thinking about how I've communicated through my work in 2009. It's been a tough year for all of us economically, and I'm no exception. In addition to my normal expenses, I had to put a new roof on a house and pay for some major repairs on a car. My personal income is solely through art. I just barely managed to make ends meet but I had to engage in both schools of thought. Two poets separately commissioned me to illustrate a number of poems for their books. That would fit into the first school of thought that Roberts outlines. The rest of my activities would fit into the second school of thought: I had a record year in painting sales and also earned money from winning awards in national and international juried competitions. Additionally, I've had a great time teaching painting and giving painting demos (I don't think that falls into one of Roberts' categories). So, the bottom line for this artist is to engage in both schools of thought in order to survive financially.

What are your thoughts?
Posted by Unknown at 11:52 AM

I like it when people tell me what I should not do. That usually gives me a strong sense of direction. My communication at this point could be described as rebellious.

What is so personal that it does not have some type of social relevance? Ego driven? Isn't anything we create - or even the fact we create - based in part on our ego? Agitated? Some of the best works out there came from agitated souls - Look at Charles Grosz, Marc Chagall, Vincent Van Gogh, Jacques-Louis David, Honore Daumier and Francisco Goya, to name a few. Afraid? Check out Franz Marc's "Fate of the Animals" or Albrecht Durer's Melencolia I. Deeply personal is an important reason I even create. It helps me "get it out" and if others respond to it, all the better.

Oops, I got carried away at bit.

Kathy, I'm so happy that your art has sustained you both emotionally and monetarily during this trying year. You have set an example that I personally find encouraging and challenging. Thank you for continuing to push your boundaries while encouraging others to do so as well. I am indebted to you for this.

Don, I've noticed that you like the word "rebellion" :) We're on the same page when it comes to imposed restrictions in art. And, I like your critique of Roberts' idea. So true! As for the financial aspects of being artist, it's really tough. I have to look for opportunities e-v-e-r-y-w-h-e-r-e.

PAMO, I thought that was you in the doorway of my reunion! :)
Thanks for offering us so much today. I, too, believe that it's important for artists to be technically competent to the point where they can eliminate any flaws that would be amateurish and diminish the meaning of the painting. Was that the problem at the exhibition you saw? As for the content of a painting, I believe that artists should create whatever they like, and the public can decide whether or not to embrace it. BTW - your cartoons aren't kitsch at all! They're a sincere expression of what you feel and a great reflection of your sense of humor.

Great topic today and great comments so far. I'm having trouble getting my thoughts together on this one. Every time I think I know how I feel, I come up with some example that defies the belief. Here goes. What I put done from here on in is what I believe to be true at this minute!!

On face value it seems sensible that an artist's work should be intelligible or why bother to make it, but I'm not much interested in adjusting what I create to meet an audiences' needs. That takes the work out of the realm of the artist and puts the viewer in control. No, I definitely have to be the boss! Several times I've taken a commission but the process creates too much stress for me personally if the demands are too exacting (I'm told what to paint). I'm not taking commissions any more. Easy for me because I have another income!

Back to intelligible.... I try to make my work accessible on some level to my audience but there are always levels of information that I know won't be interpreted by many. I'm ok with that as long as something is taken from the work. Is non-objective art intelligible? I guess not to Roberts.

I don't think work can be too personal. That is up to the artist. Nor do I think that personal subject matter is without social relevance. We are not that different. I'm sure even the most obscure topic will strike a cord with some people and if not who cares. Perhaps the work can be appreciated for other reasons (composition, textrue, colour usage etc. ) I've seen lots of work I didn't get initially but I keep thinking about it, mulling it over and looking for meaning. When something stays with you after you've seen it, it's a success.

"The unacceptable is ego driven, agitated and afraid. The acceptable is like a revelation." I can think of a lot of art that fits this category. Roberts is out to lunch on this point.

Overall I guess there's much Roberts has to say that I don't agree with. I'm getting the impression he likes very predictable art . I make this assumption without seeing any of the illustrations in the book so I might have to eat my words.

PAMO: Thanks for clarifying about the exhibit. And, I know what you mean about art that's produced only for shock effect. In those cases, I have to really study the work and ponder if there isn't more to the artists motivation than just trying to disgust me. Or, if that is their aim, then they were successful! In any case, I take a stand for the protection of their freedom to express themselves.

Margaret: thanks for taking the time to digest this post and give us your opinions. You make some great points! Oddly enough ... there isn't even one illustration in Roberts' book. Just some b/w photos between chapters of stuff lying around the studio. What does that tell you ???

Again - thanks everyone! Great conversation.

I just made some really terrific comments and they disappeared--I think I was just too slow.

Since you have such a love of books, I'm sure your illustrations were authentic.

Congratulations on being so successful at art--Planning was the subject of your blog the first time I visited. I could never be that organized.

I like Margaret's comment that if something stays with you after you have seen it, it is a success. I have always felt that the viewer needs to make a connection especially if they are going to purchase the artwork. It's a lot like adoption. You hope your artwork finds a good home.
In the same respect I believe the artist needs to have that same connection in order to create the artwork. So i guess you would call that "communication"!

Hallie: Thanks so much. I'm so happy you joined this blog!! Always great to hear your comments.

Carolyn: I agree! And, I had the same feeling about Margaret's comment. There are some images that I just can't get out of my head - even the ones that I thought were ugly. I could say that about music, too -- tunes that just keep going round and round in my head :)